Are your Time Machine backups growing every hour, being 200 megabytes or more each? Why is your Time Machine drive almost full, while you haven’t made any major work recently? The answer is that your system is blindly backing up more than you’d really care of.

One of the main suspects for it is… Google Chrome, or to be more precise, its cache. The Time Machine doesn’t exclude the Google Chrome’s cache from the hourly backups by default, and if the Chrome is your choice of web browser, the cache keeps constantly changing, and thus getting backed up every time the Time Machine runs.

This is easily fixable, just exclude the folders with constantly changing contents by going to Time Machine Preferences and clicking the Options… button. Press the + button, and select a directory you want to exclude from your backups. For Google Chrome, the default location for the current user is ~/Library/Application Support/Google/Chrome, I’ve just excluded the whole Google directory, so I don’t have to exclude each Google product later.

The following screenshot has a couple of other ideas to exclude from your backups: 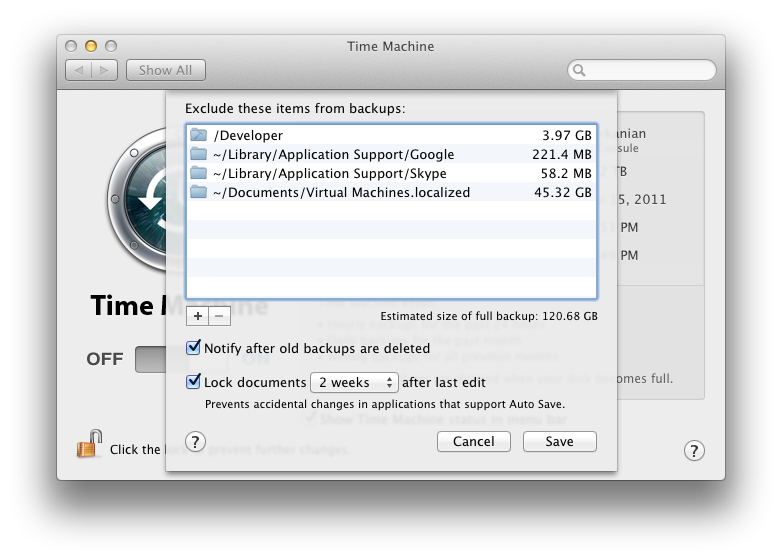 /Developer includes Xcode development tools, that I don’t want to backup every time I download a new release of documentation.

Virtual machine files are another source of large hourly backups, and I exclude them as well, as even a small change in the filesystem will trigger the backup of the whole multi-gigabyte disk file. ~/Documents/Virtual Machines.localized contain VMWare Fusion virtual machines on my system.

Dropbox folder is another example of what you might want to exclude. Dropbox by the definition is a backup itself, and unless you’re doing something fancy with your Dropbox account, is a great candidate for the exclusion. Add ~/Dropbox and /Users/other_user/Dropbox if you have multiple accounts on your computer.

This site uses Akismet to reduce spam. Learn how your comment data is processed.