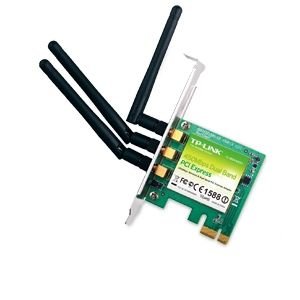 For Hackintosh builds you have several Wireless networking options.

You can either build your own one from an Apple mini PCIe boards and a mini-PCIe to PCIe adapter card, or buy a ready-made card that happens to be natively supported in OS X, plus has full AirPort support. The cheapest such card is the TP-Link TL-WDN4800 Wireless N 450Mbps PCI Express Adapter Amazon $44.99

While this card costs more compared to the mini PCIe adapter method (that sometimes requires device id tinkering with the cheapest 3rd party wifi boards), it requires no extra drivers and works out of box in both OS X 10.7 Lion and 10.8 Mountain Lion.

Running Apple’s Mac OS X software on PC hardware has been a hobby for some enthusiasts for a while. There are several forums on the Internet that discuss the topic extensively, but here is a brief article with one of the possible hardware configurations that can run OS X Lion or Mountain Lion.